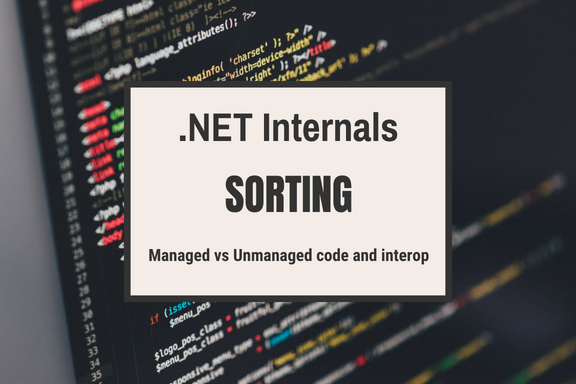 This article is Part 4 in a 5-Part Series.

Last part ended with a sneak peek of a native code. This part is going to expand on it. We are entering CLR world. But, first things first. Why do all this complicated stuff and not have TrySZSort in managed code? The answer is of course speed, let’s look into that.

Why part of the Sort is in the native code?

We can easily check how this code works in managed code. It was mentioned before but if you use custom IComparer a managed version of the code is used. I am going to use BenchmarkDotNet to check the difference. This library is excellent and beats Stopwatch based method.

Code below defines custom comparer as we need it to force managed version of the sort. Then BenchmarkDotNet is used to generate a benchmark. There are four different runs: unmanaged and managed with the size of the list from ten to ten thousand. Each list contains random integers (0-100 range).

This test is definitely not perfect but it still shows a 4-5x difference in favour of a native unmanaged code. Perfectly written and manually tuned native code will be faster, that is the case with TrySZSort. Managed code hides manual memory handling, providing simplicity and security. It helps commoditize work as it is cheaper to write software. But like every abstraction, there is a price to pay. We give up some control and flexibility to optimize the code by ourselves. The impact of that choice depends on the workloads, as in a typical line of a business app you might not have to worry about performance price. Even if you have to, you optimize the bottlenecks, not the whole system. Sorting is a specialized problem to solve and gains a lot from native code optimizations.

Marc Gravell pointed out that current Compare method is not optimal.

very interesting, but also looks like an artificially slow managed compare; why not just => x - y ?

After implementation of x-y logic the results looks slightly better for ManagedSort.

There is a special keyword extern that is used to create connection beetwen managed and native code. It is used to tell the runtime that implementation of a function is in a different (external) place. There are two ways to call external code.

Platform invocation is the mechanism provided by the Common language runtime to facilitate the calls from managed code to unmanaged code functions. Behind the scenes the runtime constrcuts the so-called stub, or thunk, which allows the addressing of the unmanaged function and conversion of managed argument types to the appropriate unmanaged types back. This conversion is known as parameter marshalling.1

To call unmanaged code using P/Invoke, a function has to be extern and have DLLImport attribute. This attribute takes DLL file library name as a parameter. DLL files are Dynamically-linked-libraries containing compiled code and metadata about it. One of the metadata is an address table holding memory addresses to all exported functions - entry points. 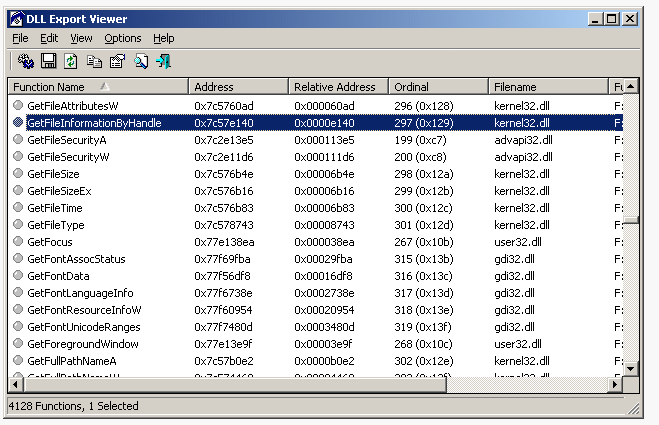 In this example, Function is in an external DLL, it is generated to an IL code with pinvokeimpl keyword.

Pinvokeimpl tells the runtime that this is an unmanaged method called using P/Invoke. It is available in library nonexistinglib.dll and has the calling convention winapi. More on calling conventions later in this post, but in a nutshell - calling convention describes how to call this particular function, something like contract between HTTP services. unmanaged dll expects certain contract to be met in order to accept the call to a function. winapi convention is an alias of __stdcall. 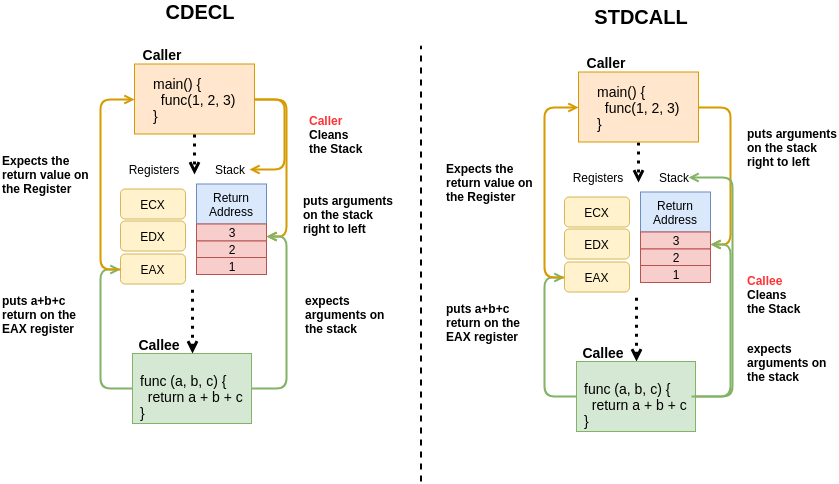 What is happening in this example with boolean function, is CLR:

It is actually a bit more complicated as there are things like execution context or sentinel item put on the stack frame to mark the boundary between managed and unmanaged code, but we are not going to get into these details.

A good real-life example of P/Invoke is FileStream.Read2. When Read is called in the end Win Api DLL's KERNEL32 and WIN32.ReadFile is used. This dll is part of Windows kernel.

InternallCall is a different way to call an unmanaged function. It is more efficient due to InternallCalls being in the CLR context, giving a possibility to relax some time-consuming rules and save on operations around security, exception handling etc. Unfortunately it is not possible to create InternalCalls in assemblies. This call can be only be used when calling functions implemented in CLR. CLR is not only about runtime, it contains optimized code used in many places like StringBuilder.ToString(). This is one of the reasons why using StringBuilder is a good practice.

StringBuilder provides a good example of InternalCall. When ToString on StringBuilder 3 is called it is actually calling FrameAllocatedString down the stack. This function is inside CLR and uses.4

From the IL point of view, the code looks a bit different than in P\Invoke and uses internalcall keyword.

internalcall - tells the runtime to look for the implementation of the code inside CLR itself. CLR maintains its own function entry point address table(example late in the post) used to find the address with the entry point. It also uses special calling convention __fastcall (more on this in next post).

It is possible to add new InternalCalls but it requires changes in CLR. You would then have to compile your customized CLR and run your code using this new runtime. Instruction on how to do this are available on the github - building5 - running6. 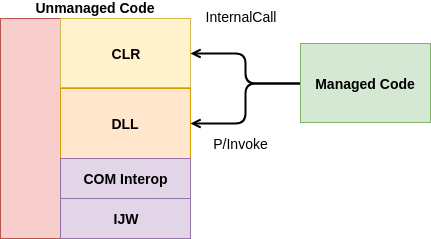 We have discussed two ways of calling unmanaged code. I want to focus now on how actually CLR called. Both P/Invoke and InternalCall are translated to something slightly different within the CLR context - ECall.

ECall is a private native calling interface. This interface is inside CLR. When the managed code wants to access internal code in CLR it tells the runtime (execution engine) to use ECall to find the function and its entry point. As with previous examples, there is also calling convention and marshalling done along the way.

ECall is a set of tables to call functions within the EE (Execution Engine) from the classlibs. First we use the class name & namespace to find an array of function pointers for a class, then use the function name (& sometimes signature) to find the correct function pointer for your method. 7

There are two types of ECalls - QCall and FCall. FCall8 is more performant but more risky, much more difficult to write correctly and uses InterrnalCall. QCall is less performant but much safer and uses P/Invoke. Qcallt is mentioned as a prefered option when calling code in CLR. FCall` should only be used when there really a good reason for it.

QCalls are the preferred mechanism going forward. You should only use FCalls when you are “forced” to. This happens when there is a common “short path” through the code that is important to optimize. This short path should not be more than a few hundred instructions, cannot allocate GC memory, take locks or throw exceptions 9

Microsoft is moving more code from FCall to managed code.

We have ported some parts of the CLR that were heavily reliant on FCalls to managed code in the past (such as Reflection and some Encoding & String operations), and we want to continue this momentum. We may port our number formatting & String comparison code to managed in the future. [^fcall-deprecation]

Example of QCall declaration on the managed side. 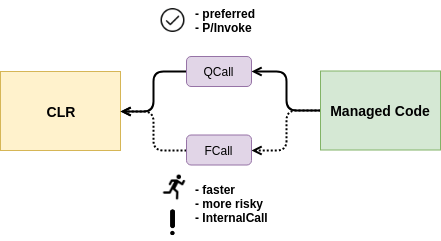 Example of FCall declaration on the managed side.

I was curious what needs to be done to generate new FCALL. This commit from MS team is a great example.

TrySZSort is exposed to managed code using InternalCall, it is using FCall. On the CLR side it uses FCIMPL4 macro for function generation.

4 is a number of arguments, FC_BOOL_RET tells the macro that this function returns BOOL. Why FCIMPL macro is needed?

It is all to do with calling conventions. It was mentioned before that calling convention is like a contract describing the way functions communicate using stack and registers but how does it work? This will be covered in the next post with a journey to the assembly code.