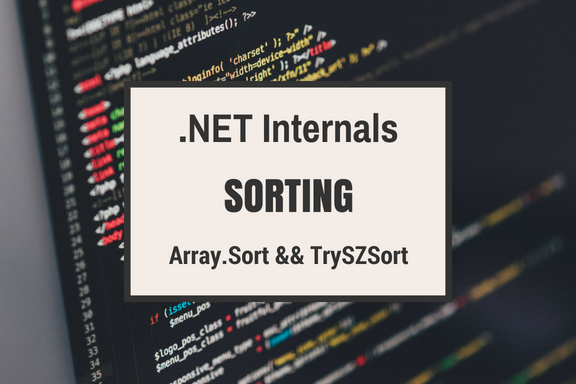 This article is Part 3 in a 5-Part Series.

In the previous part, we have explored the list internals, ending on Array.Sort function. This one we will go down the rabbit hole and explore source code of Array.Sort with a sneak peek of a mysterious TrySZSort function.

Location in the function call stack. Array.Sort is called from within List.Sort. List is a wrapper around the array. Due to this, call to Sort is redirected to Array.Sort<T> which takes an array as an argument.

There are two interesting attributes added to this function.

Code Access Security attribute. Marks function as being callable by transparent code. This is a special section of your code (or you can mark the whole assembly to be transparent) that creates a sandboxed limited environment with rules like - cannot call native code, can call only other transparent code or SecuritySafeCritical code, cannot elevate privileges or access protected resources. This feature is not really useful for web developers as we use HTTP and API layer to create our own sandbox with defined can dos and cannot dos in the contract. The situation is different in desktop and library development space. SecuritySafeCritical attribute makes it possible for sandboxed parts of the code to use Sorting. 234

Verifiable code is code that gets compiled to IL and can be proven to not produce any IL that can execute unsafe code, bypass code access security checks or in any way corrupt the state of the CLR. 5

This attribute is part of a feature called Constrained Execution Region. It was added to the framework for CLR integration with SQL Server 2005.

This feature is really useful when you write processes that have to be reliable. And now you might say that hey everything should be reliable, the software I write is also reliable, we have unit tests, defensive coding, it works. Why would I even want to use CER. Well, reliability is not a binary value. It is not like software is either reliable or not. It is like a grayscale. It is like with the cloud then you get SLA7 which is not mentioning 100% availability but 99.999%. If you look at AWS S3 even this service is not 100% durable and available. 8

Google in their great SRE talks series 9 defines more metrics like SLI, SLO and Error Budget. The world and software we write is more complicated than that. Writing fully reliable code is probably impossible and reaching each next SLA number costs more and more.

Writing reliable code in the face of everything that go wrong can be a daunting task. The good news is that unless you’re writing a framework or a library for use in CLR hosts that require prolonged periods of up time, you probably won’t need to think about this stuff too often.6

I come from a simple web services world where my custom written code execution time is short lived. There is a request and response. Usually, it takes tens of milliseconds, maybe seconds - rarely minutes. Even if there is a failure most of the time it is possible to do a retry. But what if you would like to write a software that is not only reliable for a lifetime of a single request but for months? This is where CER can help, giving options to write code that is less susceptible to failures. There is, of course, a cost associated with that - constrained options and things that you can do in the code.

Remember that in SQL Server, MTBF(Mean time beetwen failures)10 is measured in months not hours and the process restarting because an unhandled exception happened is completely unacceptable.11

In order to achieve more reliable code which was a requirement for a code running on SQL Server. CER provides certain guarantess like:

the runtime is constrained from throwing certain asynchronous exceptions that would prevent the region from executing in its entirety.6

This is not only about the runtime there are the limitations on the developer side of things like code cannot:

This is to prevent writing riskier code in specifically designated code regions making them more reliable.

CERs are a way to move any runtime-induced failure point from your code to a time either before the code runs (in the case of JIT compiling), or after the code completes (for thread aborts). 6

Ok, but what about [ReliabilityContract] on Sort method? First, this attribute is only useful in the CER. You create CER by using PrepareConstrainedRegions() function. It is an explicit decision.

In order to avoid potential OutOfMemoryException and StackOverFlowException. Before entering try block if you have used PrepareConstrainedRegion and your method has attribute ReliabilityContract. For this method:

… when used from within a constrained execution region a method marked with a ReliabilityContract will be prepared before execution by the JIT to be pre-compiled and the memory for the method will be pre-allocated when entering the PrepareConstrainedRegions. 11

If CER got you interested then try this presentation 14 big thanks to Grzegorz Kotfis 15 for the link.

We have discussed attributes, time to talk about the code. This is the source of Array.Sort. Exception throwing logic was replaced with comments to make it more readable. The core of sorting in .NET is an external native function called TrySZSort. Under the hood Array.Sort calls C++ code that is part of the CLR itself. This code is heavily optimized.

I want to focus on this code. This is were managed code mixes with unmanaged one. TrySZSort - this is the real underlying function that is not part of .NET.

length > 1 is used to check if array requires sorting. If there is only one element there is no need to sort at all. It is also worth noting that TrySZSort is called only for default comparer. If you provide custom Comparer it won’t be used. For custom Comparers, similar sorting algorithm as the one in TrySZSort is executed inside managed code. This, of course, lacks all the benefits of unmanaged code and misses most of the native optimizations.

TrySZSort what does it mean? - There are two parts SZ and Sort. Sort is obvious and SZ comes from Single-dimensioned Zero-based arrays.

Single-dimensioned - It is a typical array with one dimension. TrySZSort doesn’t support multi-dimension arrays.

It got me thinking. If zero based is explicit, does it mean that arrays could be one based? Was there no agreement on that in the past? For me, zero was always the first index. I just assumed that this is the standard. It kind of is now … but it wasn’t in the past. Hmm … can you create a non zero-based array in C#?

It is against the CLS (Common Language Specification) - which is a set of rules and limitations that you need to follow to be Compliant. Which means that your code is usable by any CLR language - (This is important when building frameworks or librarires).

All dimensions of an array must have a lower bound of zero. 16

Still CLR supports it and in C# you can make one, two, x index based arrays. By default, indexing is zero based but you can force C# to show the hidden parts. Small warning. Don’t use non zero based arrays it in your code as it won’t be CLS compliant, it is also a bad and non intuitive practice this days. IL, JIT and CLR is also optimized to operate on zero-based arrays.

since zero-based arrays are by far the most common, Microsoft has spent a lot of time optimizing their performance. However, the CLR does support non-zero-based arrays but they are discouraged.17

I know what you are thinking right now Show me how to make one based array. To do it you need to use Array.CreateInstance.

CLR keeps this as a backward compatibility for Visual Basic code. TrySZSort contains a glimpse of a long and complicated programming history. in VB you were able to create arrays starting from index 1. 18 Since VB .NET 2002 - you were able to create x based arrays. VB evolved from different language history than C# that took a lot from C.

The concept of arrays starting from 0 has also an interesting history. It wasn’t that obvious which approach was better. Digging around this topic yields interesting discussions about easier pointer arithmetic if arrays are zero-based. 0 representing a start of the memory address is also more intuitive than 1. Some people point to the Math and certain operations that are easier if we assume start of the array as 0.19

When I used Array.CreateInstance for the first time, I wondered how different it is from using new[]. Jon Skeet points to some directions in his SO answer20

newarr is built into the language while CreateInstance is a method call that actually leads to the unmanaged code inside CLR21. newarr is a IL instruction responsible for the creation of a vector which is a different name for zero-based single dimensional array. Size of array 99 is pushed to the stack using ldc.i4.s instruction. newarr uses this value from the stack to create the vector.

CreateInstance is in unmanaged code just like TrySZSort, it is time to peek in there.

First peek at the unmanaged world

As I mentioned earlier TrySZSort is a extern function. extern is a special keyword used to indicate `external’ resources.

When a method declaration includes an extern modifier, that method is said to be an external method. External methods are implemented externally, typically using a language other than C#. 22

In this case, TrySZSort is a method with implementation in CLR - extern is used to make that connection between managed code and the the CLR. We are entering C++ world now. Source code for TrySZSort can be found here 23. It is great that Microsoft open sourced it, as we can check it.

In next part, we will look into how it is possible to call TrySZSort inside CLR from C# code.