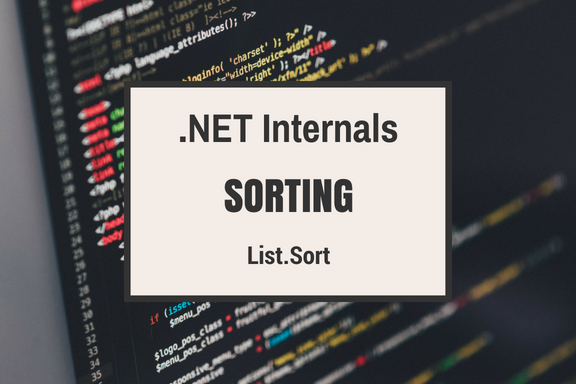 This article is Part 2 in a 5-Part Series.

If we want to discover sorting in .NET, then there is no better place to start than List<T>.Sort(). We all know what this function. As a Junior, I have never bothered to actually check the source code behind it. Back then source was only available to insiders, a handful of people and partners, considered worthy to look behind the curtain. I still remember times of Steve Ballmer and his firm stand against Open Source. It was actually lack of understanding from Microsoft CEO and a bit of a Goliath telling David that he is not ready yet. These days are gone, Microsoft did a massive U-turn, changed busines model and realised that open source can be a great ‘marketing tool’ to bring people onto services they sell. Nowadays both Reference Source1 and CLR2 code are available. For other communities like Java it is nothing special but for .NET that was a massive change. Time to look behind the scenes and analyse the code - if you are curious, follow this link.

This is just a slice of the List<T> implementation. Couple of things to note here.

_size - integer value with current List size. List.Count returns this one. If new item is added _size increments by one. This makes List.Count a bit faster as it doesn’t have to count the elements in array which would take O(n) operations. An interesting question here is - why keeping _size if array already has a property Length? This is due to the array having different size than the list most of the time. Array size is always multiplication of 2 while list can grow by +1. Matt Warren made a great blog post about it 3. I think length is encoded in the memory representation of array [^array-lengt-encoding]. Max number of items is 2.146.435.071 4.

_emptyArray - static array used for empty array creation - this makes it possible to reference the same array if there are two arrays of type ‘T’. There is no need to allocated new empty arrays all the time new empty one is created.

_defaultCapacity - initialy empty array has capacity ‘0’ but when adding first items this is the initial capacity. After 4 arrays grow by the multiplication of 2 - 4, 8, 16, 32, 64. This is done automatically 6.

Sorting list is simple. All you need to do is to call Sort function.

If you want you can sort only a slice of the list.

Analysing source code we can see that Sort calls Array.Sort<T> 7. It is not a surprise as we already know that internally List is an array.

I removed some code (throw instructions) to make it more readable. It is interesting that there is a lack of consistency for if statements. First, two are using {} and the third one is not.

Contract.EndContractBlock() is part of Code Contracts8. It is an assertion like a framework used by static analyzers to verify the correctness of code. For C++ developers it is not new as assertions are used extensively in C++. Contracts are more powerful and can be used to generate runtime checks, static checks and also tests by using test Generation tools.

List.Sort uses a different mechanism to generate contracts using Contract.EndContractBlock(). It is a special construct that wraps preceding if statements and code into the code contract semantics. It is useful with legacy code and pre-exisitng defensive code as most of it can be reused without changes.

Array.Sort is called with these parameters:

Apart from calling Array.Sort there is also operation _version++.

_version is an integer value incremented every time state of the list is changes. State here means the items of the list. Operations ending with _version++:

Why would this be useful? You are probably familiar with code like this:

If you ever wondered how does .NET knows when to throw that exception here is your answer. It uses _version number to do that. But first, we need to go to basics and not use the List.

If there is a state change in the array inside foreach there is no exception. So it is not foreach responsible for that.

Is it the List? It is easy to check that. If you use List inside for loop and change its state there is also no exception.

You need both foreach and List for this exception to happen. So there is something special happening when you combine both foreach and List. As foreach is just a syntactic sugar 9, a code transformed by the compiler to a different form. We can use a tool like sharplab.io to check how it is resolved. Code to this example.

In the end foreach using array is a for loop. Ignore OpCode not supported: LdMemberToken10.

Now when it comes to using both List and foreach there is a big change - code example.

foreach using List is not resolved to loop. It uses while loop with the Enumerator. I will skip intro to enumerators and enumeration. You can check this great article 9 if you want to learn more.

In a nutshell, Enumerator is a wrapper on top of enumeration - a process of stepping through the items. In a simple for loop, this process is not complicated, take one element and do something with it. You can expand it by adding more logic: validation, checks etc, but there is one limitation. Each next value doesn’t know anything about the previous one. There is no shared context or state.Enumerator adds this shared context by being a stateful intermediary betwen the collection and the code. This enables us to add new logic whenever there is a movement to a next item or current item is obtained. The beauty of it is that foreach understands Enumerator.

One example which shows the beauty of Enumerator is list state protection during enumeration. It uses _version value to do that.

If we simplify the previous example we get a simple code that gets enumerator, uses while loop to call MoveNext function and then uses Current to obtain the element.

If we look inside list.GetEnumerator(). We can see that all it does is creates a new Enumerator using itself (the list) as a input parameter.

We need to go deeper to the constructor of Enumerator to see how it is used.

First, it takes the reference to the list itself. Then sets up an index to 0 - which means that it starts with the first element and current value is set to the default one. But the most important piece here is saving the current _version value. This value is private and does not change in the whole lifetime of the Enumerator. How is it used?

We discussed already how Enumerator wraps operation to move to next element and get the current element. If we look at MoveNext source code we can clearly see how _version is used.

And here you go in the MoveNextRare() function there is a check if the saved initial version value is the same as the current list version. It basically checks if a list was modified during the Enumeration. If it was then an exception is being thrown.

Is to check if iteration reached the end of the list. In that case MoveNext returns false and while loop ends.

Why is state protection important during enumeration?

This code adds 10 to the beginning of the list only once. If you look a the output due to this number 1 is displayed twice and there is no 10. When 10 is added, i is 0 and will be 1 on next iteration. Due to 10 added at the front, the element on the 0 index moves to 1 and is printed twice when i is 0 and 1.

Enumeration using foreach and List with _version value is here to protect us from that kind of mistake. Thanks to it we can you assume that when using foreach List won’t change. This frees you up from implementing more complicated application logic. It is a similar concept to using different types of collections, limiting possibilities and sending a message to a fellow developer Hey I am returning IEnumerable because I am expecting you to only enumerate this collection. In this example it says - Hey I am using foreach on purpose and making sure that nothing is gonna change that list during enumeration.

The Journey has started. There is, of course, more things about List that we can write about, but I leave that to you dear reader. In next part, we will move down the rabbit hole and discuss Array.Sort() also touching TrySZSort magic.

Btw If _version value is int and it increases every time we change the state of the list. Then does it mean that you can do a limited amount of operations on the list? I am curious about the answers :)